A virus that had once been contained has returned, and soon no place will be left untouched by its destruction. But when Cheyenne wakes up in Elysian Fields--a subdivision cut off from the world and its monster-creating virus--she is thrilled to have a chance at survival.
At first, Elysian Fields,with its beautiful houses and manicured lawns, is perfect. Teo Richardson, the older man who stole Cheyenne's heart, built it so they could be together. But when Teo tells Cheyenne there are tests that she and seven other couples must pass to be worthy of salvation, Cheyenne begins to question the perfection of his world.
The people they were before are gone. Cheyenne is now "Persephone," and each couple has been re-named to reflect the most tragic romances ever told. Everyone is fighting to pass the test, to remain in Elysian Fields. Teo dresses them up, tells them when to move and how to act, and in order to pass the test, they must play along.
If they play it right, then they'll be safe.
But if they play it wrong, they'll die.

What were your three favorite things about writing The Dollhouse Asylum?

1) The premise. I tried to shelve earlier drafts, but I couldn't get the premise out of my head. This girl was trapped, and I had to get her out. I had to share her story, her inner battle about the man she loves and hates.

2) The literary couples. In truth, at first, all I knew was there were seven men and seven women living across from one another on the street. This became quite a hefty cast! So then I thought, "How can I make them easier to remember, easier to keep track of?" And the literary couples hit, and I began to research them. They then became key for the tone of the story--how brooding and dark it is.

3) In revisions, my editor wanted me to write some flashbacks about why Cheyenne loved Teo so much. Writing these scenes were so heartbreaking, yet so rewarding because they expressed her torture through loving him. I especially loved writing the scene where she dropped her books in the rain, and Teo saved her from having to hand them over to the school secretary for being late.

What was your least favorite thing?

The setting (at first). I'm the type of person who barely knows where she's in a room half the time. I was so intimidated about implementing it better in my story, but my editor helped me understand that I needed to ground the reader, and when I realized the homes needed to match the couples, and I forced myself to focus on this element, it became fun. I drew blueprints for the rooms, and even used the interior of my own house to identify where things in a room needed to be.

What does your writing space look like or consist of? 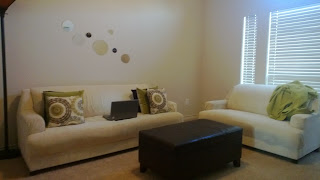 My office is a work in progress. Eventually, I'd like to have a shelf in the corner between the two couches, and maybe a desk, but I do like putting my feet up on the ottoman and sitting on a couch while I write. I also often write at Starbucks and even in bed. Mostly, I write where I can hide from the other chaos stemming from my little ones in my house. When they're all in school, though, (my youngest is two) I plan on making this my official office. More stuff will go on the walls. :) 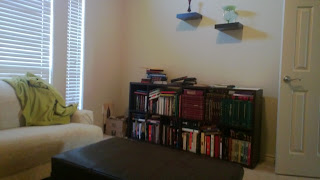 If The Dollhouse Asylum had a theme song what would it be?

It's actually the song in my trailer (which you can see here: http://www.youtube.com/watch?v=x7l_Fm486gM). The song's called SPIDERS AND NEEDLES from the band, Descention. My sister sang and composed the song, and I played the piano. My husband actually played the bass for the band for the while, and my brother played guitar. But this song fits my book because of its slow, brooding start, then powerful rage. It has this understated heartbroken quality to it, and then it just gets angry. It's both beautiful in her reminiscence of the guy she loves, then her helpless desire to do something violent.

Being a debut author, what’s your favorite debut novel released this year?

I fell hard for INSOMNIA by J.R. Johansson. It's the perfect amount of creepy, and is so unpredictable. In my opinion, she nails the male voice. I loved it!

About The Author
Mary Gray has a fascination with all things creepy. That’s why all her favorite stories usually involve panic attacks and hyperventilating. In real life, she prefers to type away on her computer, ogle over her favorite TV shows, and savor fiction. When she’s not immersed in other worlds, she and her husband get their exercise by chasing after their three children. The Dollhouse Asylum is her first novel.
Website
Author Interview Blog Tour Cover love Debut Author Interview Mary Gray Spencer Hill Press The Dollhouse Asylum Young Adult
Source: http://www.fallingforya.com/2013/10/the-dollhouse-asylum-blog-tour.html
Tweet